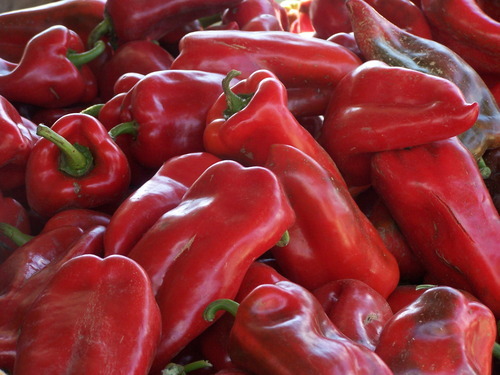 Mounds of red peppers are suddenly on display everywhere we go in our neighborhood in Belgrade: in the market, on the side of the road, and in the trunks of people’s cars. Sweet red peppers abound in this region, and it is a tradition – a very, very longstanding one – to roast the peppers in the fall and make ajvar, a sweet red pepper relish. Lots and lots of ajvar is made. People make jars of it to store for the winter months, in order to have some all year. As we drive through the winding roads of Koshutniak Park behind our home, we even see people roasting the peppers over an open grill, a large pile of peppers next to them.

I am invited to an ajvar- making day at the home of my new friend, Indira, a Bosnian woman who is married to an American diplomat. She grew up on the border of Serbia and Bosnia, and her parents still live there, so she is lucky to be posted in Belgrade, close to her roots. The others who come for the day are also American, except for Indira’s mother, who’s in charge.

We begin the day at nine o’clock. With the boys, I’m almost always up early. I make a peach cake in our cast iron skillet to bring to the party, baking it in the oven with sugar, cinnamon, and butter melted on top. I purposely do not take a shower. I am planning on getting very messy.

Billy goes on a run, and Ethan and Gabriel walk with me to Indira’s back yard. Indira holds up a plate of bread. “Here, have a slice. I woke up at 3:00 this morning to make it. I couldn’t sleep! I was dreaming ajvar!” Her laugh bellows fully and loudly. She is a generous woman, big-spirited and warm. I take a bite of her homemade poppy seed bread strudel, while she prepares a tray of coffee. Others by now are straggling in, offering their homemade goods too.

The fire pit in the back yard is lit. After an overcast morning, the skies are starting to clear. It is going to be a glorious day. Tables and chairs are set up beneath the trees in the yard. A small mountain of garlic needs to be peeled; 60 kilograms of red peppers and eggplants need to be washed. We get to work. Two stoves where the peppers will be charred are getting hot: one in the ground, built by Indira’s father, is a kind of pit with a chimney; the other is a wood stove, borrowed for the day. People have wood stoves for the sole purpose of making peppers every fall. Indira brings out a bag of marshmallows. “Would Ethan and Gabriel like to roast these?” she asks. They run for them.

After the peppers are charred and steamed, the group of us – mostly women, but a few men from the neighborhood, too – begin the laborious process of taking off the pepper skins. It’s hard work. We scrape at the tough skin, pepper after pepper. But there’s easiness in the air. No one is moving very fast, because there is no hurry. There are enough people to do all the work. My hands are turning red.

After scraping and scraping, at last the end is in sight and they are complete. There is a chorus of “Hurray!” Indira moves the process forward. “Next step!” she commands. “Who’d like to grind?” Two low stools are placed in front of two small meat grinders. “All those peppers have to be put through the meat grinders and ground to a pulp,” Indira tells us. Two women step up to volunteer.

All the garlic has been peeled and chopped by now. Two big pots, low and wide, are getting hot on the stoves. I watch Indira’s mother add lots of oil, and then the garlic. I lean over the pots and breathe in the smell. She doesn’t speak any English, but her eyes smile at me. I take in a deep breath above the sizzling garlic and close my eyes. I am enjoying this delicious day.

Indira’s husband brings out bottles of homemade beer and cherry rakija, a very pungent, high-alcohol-content brandy. Indira brings out a platter of another type of bread she has made and the ajvar she made last week, along with feta cheese and olives. “Time to eat!” she announces. We feast around the long, wooden table outside next to the stoves.

Someone starts talking about the upcoming Marine Ball, a yearly tradition in U.S. embassy communities. “What’s everyone wearing?” Indira asks. I listen to descriptions of elegant, just-bought, floor-length gowns. I will definitely be out-dressed, I can see that.

I’ve been sitting quietly listening, just enjoying the light chatter, but now I feel I should contribute to the conversation. So I say, “I’m wearing a long black dress. It’s not really a gown. It’s pretty simple, really. The good news is that Billy ordered me a Wonder Bra.” They all laugh. “Not that it really makes a difference,” I say. They laugh some more, and do so I. It’s sunny, and the air is cool. A spouse of one of the women there ambles over, sits down in a chair and plays Serbian folk songs on his guitar. Does it get any better than this?

By now, the ground red peppers and eggplants, salt, and more oil are in the pot. The trick is to keep on stirring. We all take long turns. “Someone else’s turn!” Indira says, as she stands up from the pot she’s been leaning over. I walk over to her and she hands me the long wooden spoon. I sit for a very long time, stirring and stirring. The smell of fire is seeping into my clothes – a fine, woodsy, earthy smell. We stir for hours, moving quietly, stirring, cleaning up, eating a little bit more, drinking a little bit more.

The day is starting to disappear. Indira’s mother tastes the ajvar. It’s ready. We then begin jarring. By now it’s dark. We work quickly, filling the jars to the very rim so that air cannot get in. Then they are sealed and wrapped in a blanket. They need to be all bundled together, like little puppies, says Indira. The heat will seal the jars completely.

The pots are now basically empty. “Who would like to scrape the bottom?” Indira asks. We all do. She goes into the kitchen and carries out a tray of more bread, warm and delicious; I cannot think of anything better that I have ever tasted. I can taste the smoke, mingled with all those other wonderful flavors and the great outdoors. We finally say our goodnights. Billy has long ago collected the boys and gone home. I walk home in the dark with my jars of ajvar, down the path and across the street into my house, where I put the jars on the shelves of the pantry – just as rural farmers and homemakers have been doing for centuries.

Regina Landor currently lives in Dhaka, Bangladesh, with her spouse, two boys, 80-year-old mother, and cat. She recently published her first book, Forever Traveling Home, about being in the Foreign Service as a spouse and as a parent. The book addresses loss, fear, success, commitment, new life, and survival. Most of the book takes place during their first posting, in Belgrade, Serbia. Here is a link to Forever Traveling Home: